Down Holes and In Hedgerows with the Fisher F11

Down Holes and In Hedgerows with the Fisher F11 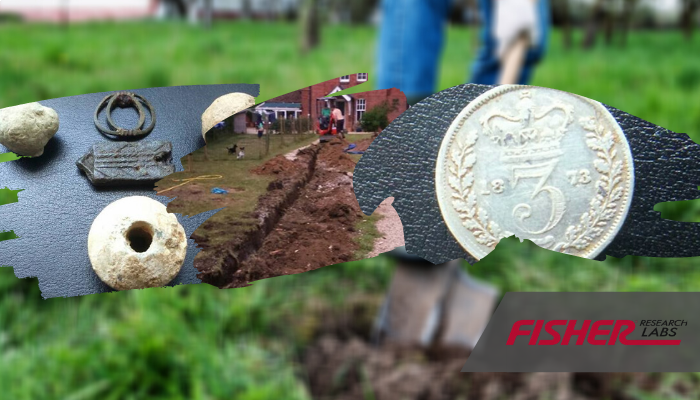 Finally I have managed to get out and scratch up enough land to properly test this machine out, over here in the UK, as I am sure you will be aware we have a season for detecting and while the crops are still in the ground it’s very hard to find some land to detect on, especially as all of my pasture has some very curious and skittish horses on it at the moment.

(Tip: Never give a horse a mint when you are detecting unless you want to be jumping over a fence eventually).

Anyhow as a fellow detectorists and historical writer Julian Evan-heart said : “Where do we detect on the off season, how do we get our fix?”

Any which way we can is the answer! My first foray with the F11 was in the margins of a corn field, funnily enough the field itself is pretty bare of finds however I know from past experience and finds (Medieval silver ring and a Ship Jetton from the 100 year war with France bought back from there for our troops to use a gaming pieces) that during the off season it’s a reasonable place to have a go. I again took my middle son Oliver with me as since testing the Digitek with me he has the detecting bug! Oliver was utilizing the F22 this time and I was using its little amigo the F11. One thing that became apparent almost immediately was that the interference between the two machines is significant, I had to literally move around 20 feet from Oliver to stop the chatter and when he or I found anything then one of us would have to leave our detector where it was before making our way to the other. That being said I did find the F11 to be very stable once away from the F22, the recovery speed is good and as I will come to in a minute, this is a very good quality to have in a lower range machine, especially in Iron (Ferrous/Fe) infested areas. My first good signal was a small musket ball at around 6” depth, this gave me confidence that the machine was getting deep enough into the soil to find targets that I would normally be finding with the T2 SE. While I took a breather Oliver took over with the F11 and within a few minutes came up with a very delicate medieval buckle, only just over 1cm and very unusual with a double ring design.

The hunt continued and the usual suspects fell to the F11, a spindle whorl, more musket balls and a rather nice strap end with line and chevron markings on it, again probably medieval. One thing that I also noticed while walking back to the car was that the battery cover had fallen off the back, I quickly retraced our steps and located it however, maybe I hadn’t put it back on right to start with but it looks like it could easily be knocked and fall off and be lost. Maybe a rubber lanyard attached to the machine may help?

The next outing with the F11 would really put it to the test amongst contaminated ground. My older brother had located an old Victorian rainwater cistern on his property and had paid a specialist contractor to make it functional again, he was also having an electric gate installed and needed to run an armoured power cable the length of the garden to get power to his front drive. His house is early Victorian in design, so I jumped at the opportunity to go and “Help”.

The cistern itself was back filled with all sorts of rubble all smashed into what was left of the old corroded pump pipe that would have gone to a hand pump. This made for a great test of the discrimination and recovery speed of the F11. It happens that the well contractor and his wife had their own detector, a “yellow peril”. The well lady asked me to show them how to use their Euro ace, as she said that she couldn’t get it to work. I explained the basics and set it up for her. Within the first couple of barrow loads I had found a George V Farthing much to the excitement of the well man’s wife who quickly dumped her machine and had a go with the F11, within a few minutes she had got used to the Fisher set up and was well away (Pun intended).

Not much else came up that day apart from an old gas lamp fitting, loads of old milk bottle tops and what I think was the end of a hair pin. I was however awaiting the final few barrow loads that would have been the sediment settled at the bottom of the well. I got a call from my brother to say he had put the final few barrow loads on a separate tarp for me to search (very kind of him) and finished my bacon butty and drove over to see what secrets would be revealed. I don’t know what I was expecting, maybe that it had been a wishing well I suppose? I think we all have hopes and dreams while detecting as your mind wonder and imagine different scenarios playing out.  Needless to say I was not disappointed with the ability of the F11 to get a target out from the grains of rust that were clearly visible in the soil. I first pulled out a young Victoria “Bun head” half penny in lovely condition, quickly followed by two more young Victoria penny’s, I have to say I was getting excited. However the finds seemed to dry up and I had spread the pile of detritus over the tarp to get the depth down to a minimum, but this caused me more problems as I was then detecting targets beneath the tarp in my brother’s lawn (and they were good targets too!). Unfortunately he (His other half) didn’t want to do any more damage to their lawn. On my last go over the spoil however I thought I had hit another target below tarp and gave it a nudge with my foot, scanned again and it moved, to top off the day a lovely Young Victoria silver 3d (or Thruppence) twinkled up at me, the amount of times I have been detecting all day without finding much of not and the last good diggable target of the day (normally on my way back to the car) turns out to be the best find of the day. I do like the multi tone on this machine, it gives you a great idea of what you will find and I found it to be very accurate to the actual finds.

The Well contractors were so impressed with the performance that they said they will be putting the Garrett on EBay and buying a Fisher machine, I had to smile. While I was there, I also used my T2SE on the deep BP mode and a 15” coil to locate the gas pipes and old Victorian water runoff pipes that fed the well,  so I wasn’t just messing about while others worked hard in the sun. Although when you are working doing something you enjoy its hardly working is it?