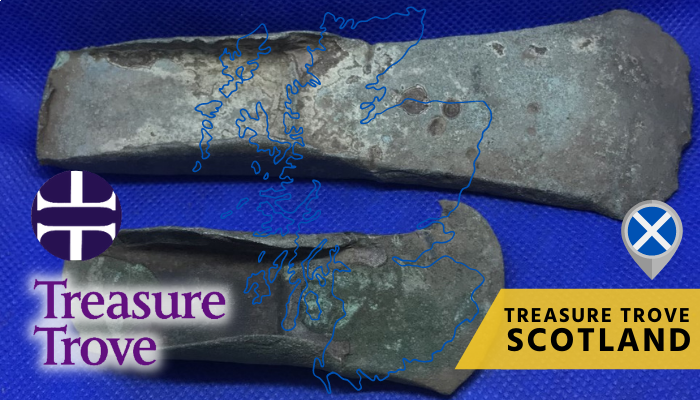 Up until recent years, if someone were to mention the hobby of metal detecting, most of us would conjure up images in our minds of a lone figure scouring the fields. We would imagine that elusive character to be in their senior years and clad in clothing that looked as if it had had a previous life in the military. To spot the fabled detectorist in the early years of the sport might have been akin to trying to sight a rare newt or migratory bird, however in these current times things have changed.

For many reasons that I have covered in previous articles, the hobby of metal detecting has surged in popularity. The advent of new and improved technology and high quality but affordable machines have meant that it seems as if most of the country’s population is out there looking for long lost items of our past.
But what happens if you do find something of interest?
This article will cover the processes and pitfalls of reporting finds in Scotland. South of the border the reporting process is handled by the Portable Antiquities Scheme or PAS, however for those of us who are lucky enough to find something worth reporting in Scotland, then the people we need to turn to are the Treasure Trove Scotland or TT.

So, who are the TT?
Well, to answer that we need to go back a few steps and understand what the law says about items found in Scotland.
Any ancient item found in Scotland, regardless of whether it is made from precious metal or not, is the legal property of the crown, so the law requires that you report it.
Items can be found in many ways. Of course there are those of us who purposely set out to find artefacts with our metal detectors, and in doing so most of us know how to go about reporting finds. There are also chance finds made by walkers, gardeners, construction workers and the list goes on, but they too have to report any finds they make.

So to whom do we report our finds? A quick Google search will point anyone to the TT’s website, from there on by following the simple links it is a relatively easy process to fill in the online report form. From this point on, things can start to become a little bit frustrating to say the least!
The TT is responsible for the daily running of the Treasure Trove system, we will talk more about it later. The TT has been delegated authority from the Queens’ and Lord Treasurers’ Remembrancer or QLTR. The QLTR are the body who will decide if your find is to be claimed as treasure trove or disclaimed and returned to the you the finder.

Simple so far, right? Well not quite!
If the QLTR decide to claim your find, that item will then appear before the Scottish Archaeological Finds Panel or SAFAP, they will then decide what value to place on your find “ex gratia”. They will then inform any relevant accredited museum who may wish to purchase the item for their display. Finally, once the entire process is complete the finder will be awarded a certificate saying that the item has been claimed and at this point they should receive their ex-gratia payment.
Although this process may seem a little confusing or daunting for a first-time finder, it is in essence quite simple, from the moment you fill in the form and hand over your item there is nothing else to do other than wait, but the waiting is where the first of many problems can start to rear their heads!

The time scale for any item to be processed, claimed or disclaimed can vary dramatically, but the TT advises a wait time of around one year, but sadly this is rarely the case.
Finders have frequently been exposed to wait times of more than three years, some finders have had to wait even longer for an item to be returned or claimed, other finders have alleged that their items have been lost or just simply never been claimed or returned.
Others report that often their emails go unanswered, several finders reported that even after emailing photographs of their items to the TT (one being a gold Posey ring) the TT simply failed to ever reply.

On many metal detecting related social media platforms, just the mere mention of the TT can set the comments box alight on any thread, people’s frustrations with the TT are real and something that they feel deeply passionate about.
It was that very frustration that led me to write this article.

Archaeologists and metal detectorists on the whole have never seen eye to eye. Archaeologists have long thought that the humble metal detectorist is nothing more than an uneducated ham fisted treasure hunter. They, the archaeologists, believe that the metal detectorist will remove items out of context or potentially damage a one-off piece of archaeological evidence.  But for those of us involved in the hobby we know that is simply not true, many detectorist’s have honed their skill and knowledge over many years of detecting. Their ability to identify a tiny fragment of an item will often leave the experts envious of their identifying prowess. Metal detectorists are proud and devoted to what they do, they have a large network of fellow enthusiasts that they can call upon to help them with their research. One key point that should not be forgotten is this, the largest percentage of significant archaeological items found came not from carefully planned archaeological excavations, but they were found by the very people the archaeologists seek to stifle.

In recent years there have been several movements to attempt to grow a more mutually beneficial relationship between the two parties and to some extent that relationship has blossomed. There has also been a drive by the TT to improve their relationship with detectorists, after all they see first-hand the benefits that the metal detectorist brings to the world of archaeology.

So why is it that the press and the archaeological world only concentrate on one thing, the rogues and thieves who don’t play the rules! It seems that almost weekly there is another press release about metal detectorist’s operating on historical sites, or people who have made significant finds but have failed to do the right thing. The news reports always have the headline of “metal detectorist” but those individuals are not metal detectorists, they are nothing more than common thieves who use a metal detector as a tool to steal artefacts in order to illegally make money.

What is not reported is the endless hours of hard work put in. Some detectorists may go years before they find an item worth reporting, but they stick at it and keep on searching because it is their passion and hobby. When we find an item it can sometimes be nothing short of elating, the excitement of finding an item that has lain unseen, potentially for thousands of years, is indescribable. It is then that the hours of digging, the cold, mud, removing hundreds of drinks cans and foil wrappers all become worthwhile. And then what do we do with that coveted item? We do the right thing and hand it over to the TT!

So, with that said you can understand the ever-growing frustration between the detectorist and the TT. To have to hand over an item that you may have spent years looking for is of course the proper and correct thing to do but it doesn’t make it any easier. To hand your treasured find over to an organisation that seems to be more dated than the items they seek to record can be at best a testing experience. Lack of communication, impossible wait times and not fit-for-purpose systems only compound the feeling of doom when dealing with the TT.

Like all government organisations, they can only work with what they have available to them, and we need to keep that fact in mind. Staffing, underfunding and other unseen issues can only go to work against them, but someone or something needs to be held accountable. The TT’s antiquated system is serving to do only one thing and that is to make finders reticent to use them.

A recent online survey commissioned in an attempt to try and understand where the problems lay proved to be nothing short of damning with many finders reporting similar trends and pitfalls.
Here are some of the findings.

Finders were also equally unimpressed with the return times for their disclaimed items, although some finds were returned within 1 year the majority far exceeded that. The ex-gratia payments received an overall average to fair grading, so it appears that the majority of us are relatively happy with the payments received. Another disturbing response indicated that a small percentage of finders claimed that their finds were either lost or unaccounted for!
When asked if they believed that adopting the same policy as the Portable Antiquities Scheme (PAS) with regard to employing Finds Liaison Officers (FLO’s) 79% were in favour. The common opinion is that by employing FLO’s they could serve as a filter, in essence triaging the items found, ensuring that the items that did make it to the TT would be of importance and allow the system of claiming or disclaiming to run more efficiently.

Now of course we all know that we are compelled by law to continue to report our finds to the TT and the answers on the survey simply mean the finders are unhappy about having to use the process again as it is. It is not stating that they will stop using the reporting process.
The facts from the survey along with the ongoing grumbles online clearly prove that there is a need for things to change. The TT system has become outdated, the influx of people taking up our hobby here in Scotland has meant that the number of finds has simply outgrown an already failing system. These failings can only result in significant finds falling by the wayside and not being recorded and processed as they should. The result of all this means that the wider public will be denied access to these truly wonderful fragments of our rich and fascinating history. Even as I write this new artefacts and coins are being discovered, some of those finds may assist in rewriting our understanding of those who walked this country before us. It would be a travesty to allow that to happen and the only way to stop that would be to re-invest in the TT.

We need to bring the Treasure Trove into the future so that we can take care of our past in the way that it deserves. We all need to assist by continuing to report our finds, but the government and the TT need to play their part too. They need to foster an environment that encourages the reporting of finds as that simply isn’t the case right now. They need to make the process easy and smooth, they need to make it useable!

In summary, it is in everyone’s interest that the TT system receives a dramatic shake up and modernisation, how that happens will not be down to us to decide. The facts are real, the system is broken and it requires not simply fixing but reengineering. Doing this will ensure that our cultural heritage continues to be recorded and cared for as it should be for many generations to come.