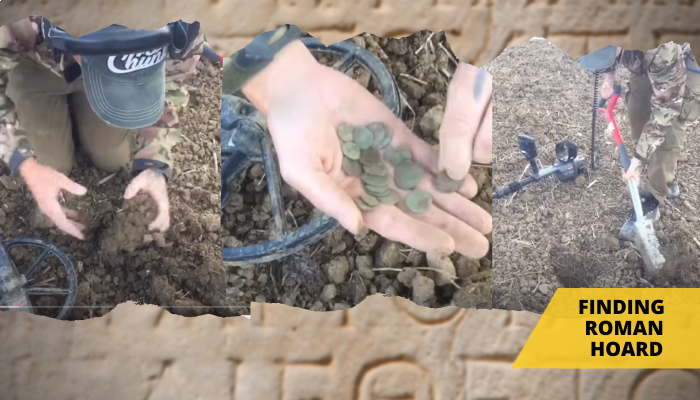 Many years ago while researching for the TV show Hoard Hunters (History Channel), we looked at a site near Whaddon Buckinghamshire where a hoard had been found in the 19th-century. This  hoard of Roman coins were unearthed while the field was being excavated for land drainage. A pot was hit and coins spilled everywhere, so there was a good chance a few had been missed and that would make a great TV show to watch... if only we could find the spot.We gathered all the research and tried to find the approximate area of the find. But it soon became apparent that records were very unreliable, with multiple find spots close to a Scheduled Ancient Monument. We decided this Hoard Hunter show was never going to make the short list.Two years later I received a call from a local detectorist, Mike Bowers, asking my advice about a lot of Roman coins found in a small area of a field. When he told me they were found near the small village of Whaddon, I straight away realised Mike had discovered the lost Roman hoard site we'd been looking for.

Mike Bowers Getting to the find area, it was confirmed that the 19th century possible find spots were all wrong, something I often find. I guess it's human nature to keep the real treasure location secret, claiming the find was made nearby in another field.

Here's a short video of when I visited the site and helped him recover the remains of the scattered hoard;
Finding a scattered Hoard

The 162 coins were handed into our local finds liaison officer (FLO), and Mike has recently received a report from the British Museum.

When I told Mike this was a known Hoard site, and that I'd been looking for the spot for several years. He told me he had searched the field many times never finding any Roman coins. So he was shocked when he started pulling coin after coin out of an area he'd walked past many times.So this just goes to prove: that all the research in the world, doesn't amount to anything without a bit of luck to get you to swing over the right spot on the right day.Now get out there and find something !