Questing For Fun in The Fields – Field trial, Quest X10 and a whole lot more than anyone imagined.

Questing For Fun in The Fields – Field trial, Quest X10 and a whole lot more than anyone imagined. 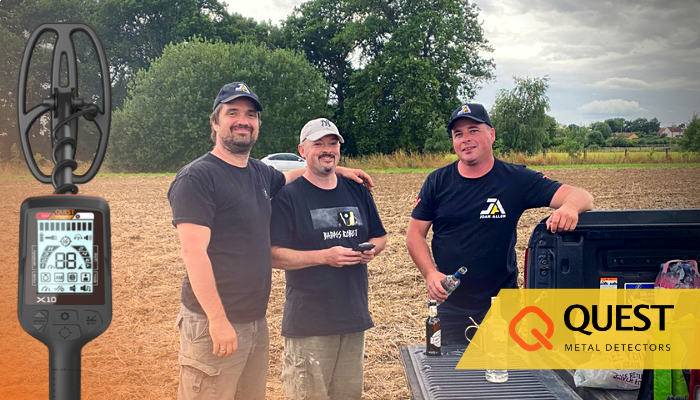 Last Sunday I had been invited with my mate Dan, to do some detecting on one of our friend Luke’s permissions. It was an opportunity to meet up with some friends I hadn’t seen for far, far too long. The current pandemic, work commitments, DIY that needs doing on the house and a few hours drive adding to the surplus of lame excuses not to get out in the fields and enjoy myself! The other reason for the visit was to conduct a field test with the Quest x10. I have to admit the Quest range is new to me, so this is both a completely cold eyes review and potentially a steep learning curve.

I will quickly go through a few of the key things that stood out to me immediately from this lower mid range machine (Priced at £199 at Joan Allen https://joanallen.co.uk/quest-x10-metal-detector.html). Surprisingly it has all the bells and whistles one would expect from a machine twice its price from other manufacturers, an impressive start to say the least.

Three pre set search modes: Jewellery – All metal – coins and best of all a fourth that is a custom setting! This custom setting is stored in the unit for when you want to use it in future, irrespective of if you turn it off. I have used machines four times the cost of this without that feature, rather annoyingly you have to adjust the setup every time you turn these machines on, wasting valuable detecting time!

The next impressive feature is that you can “notch out” unwanted targets. Notching out targets is not something I would normally do; as I like to hear everything that’s going on beneath my feet but this can get VERY noisy and VERY confusing if you aren’t used to it.  That being said should you not wish to hear and see on the VDU iron nails or pull tabs you can simply turn that target off. This would be invaluable to those new to detecting (this is an ideal starter machine) who just want to hear the coin and jewellery targets; without other confusing tones and numbers flying all over the place.

This brings me to the tones; I normally detect using the standard two tone audio response for simplicity. I make a mental note of the low tones (farters) that indicate iron and listen out for the higher tones (beepers) that indicate a signal that needs digging up. The X10 has the standard two tones above, but also the option to change to six other iterations varying from one mid tone with no iron base all the way to pitched / variable tones dependant on the signal strength of the object detected, very impressive!

To top it off I also coupled the Quest Wire-free Pro headphones with the unit to make it completely wireless while searching, they work really well with no noticeable lag and are very comfortable even on hot days. Anyway enough of the technical stuff and into the field!

It was on a Sunday that we all met up in Suffolk, I had woken up at an ungodly hour to make the pilgrimage from South Oxfordshire to South Suffolk to meet my two mates and have an early start to a full day of detecting. We met at Luke’s house, kitted ourselves up with our batman utility belts (some more like bat bum bags than others) and wandered off down a winding tree lined country road towards the permission.  The weather the day before had been a bit wet, but the morning was heating up fast. We passed comment that it would work in our favour giving us a bit more depth (increased conductivity of metal targets due to ground moisture). As we turned a corner I could see lovely flat fields with old rotted rape stubble. The fields looked to have been disked and in places drilled with a cover crop of clover, used by farmers to add fertility to the soil and fix nitrogen. Dan and Luke were already off detecting as I decided to remove my jacket and hang it in a nearby tree; it was already heating up at nine in the morning and very humid. By the time I had turned my Quest X10 on and manually ground balanced or “ground grabbed”, which is something that took a little time to do (I will feed this back to the manufacturer) and set the X10 to its first pre-set mode of Jewellery , my amigos had made significant progress across the field.

One tip I would give anyone is to not zoom off when entering a new permission, take your time to have a good look about for darker patches of soil, as these could indicate habitation and therefore richer soil and more targets. I also take a few seconds to look for random dips and other interesting topographical features, nice things gravitate towards dips and troughs and they in themselves could have archaeological significance. Finally spend some time at the entrance to a field as people would have gathered there before starting work, having lunch and most likely getting paid for their days toil in the fields. Also the farmers and labourers wives would have sat and watched their family working while spinning wool, sewing and so on, unless it was the harvest where all hands would have been on deck; therefore coins and artefacts such as thimbles and whorls will have accumulated and be found in such areas. Having said that, my quick search didn’t reveal anything of any great interest apart from a weighty spindle whorl and a livery button. I progressed along the edge of the field until there was a slight bend where I hit and locked onto a nice solid target coming up at a repeatable 72 on the X10’s VDU.

The depth showed as being 6” and as I dug the first full spade full I noticed a little bit of silver fall back into the hole, the first handful of dirt revealed a rather shiny Sixpence. As I looked up to see where the lads were to go and say I had had my first silver with the X10 there was a scream from Dan who had been using the Quest Q30+, it was truly something to behold as both Luke and Dan ran a good 200 yards to meet each other “it’s done it, it’s only gone and done it!” Dan was shouting. I made my way over to find that he had done it; he had found his first Gold coin with the Quest 30+ and what a little stunner it was too, a ‘Floret Trophy’ type Celtic Quarter Stater from 60-20 BC .

At this point we all had a good search around that general area until our stomachs got the better of us and we decided to beat a hasty retreat from the midday sun and have a pub lunch. We had a wonderful roast beef dinner at the Lindsey Rose discussing our finds and the machines and took a Yorkshire pudding shot of the rose gold Celtic quarter stater that Dan had found.

None of us expected what was about to happen.