Found in the Fields – EQUINOX Gold!

Found in the Fields – EQUINOX Gold! 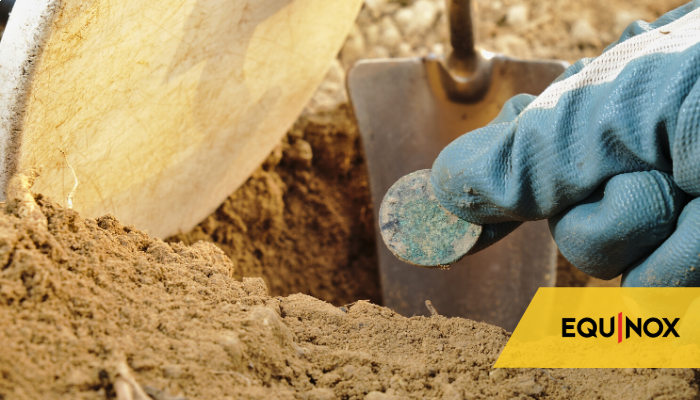 The EQUINOX has proved to be a very lucky metal detector for me during testing. From the countless hours of field trials for Minelab, amongst the many Roman and Medieval coins and artefacts, I've been fortunate enough to find three pieces of small gold... so far!

The first gold was a small cufflink button, centred with a white stone.    It was a random find on a field I had never previously searched. It gave  a Target Identification (TID) of 6 on the EQUINOX, and when I checked  it with my CTX 3030 it read 12:01, which is as low a positive TID as you are likely to detect (usually aluminium foil). Although a modest find, it gave me a ‘buzz’  because I could now see the benefit of the Multi-IQ extra sensitivity & started to imagine the possibilities.

The second gold was even more of an exciting discovery. I was searching a site that had produced several Saxon silver coins over a period of ten years. I had chosen this site because it had become difficult to find anything other than iron... it really was appearing to be completely "worked out". I had been searching for about an hour and had already found a few broken bits of Roman coins. I was really feeling happy with how the EQUINOX was preforming, when I received a strong two-way target response with a TID of 11. Digging down about 5" and shovelling the spoil to the front of the hole, I caught a glimpse of gold, what I initially thought was a small medieval quarter Noble. Picking it up, I realised it was way too small to be Medieval. Then knew I had found something a bit special; a Saxon gold coin!. Once I got home I started searching the Internet, and posted images for Rod Blunt on the UKDFD forum. Rod soon came back with the ID. It was a Saxon English Thrymsa. Here's an extract from his identification:"There are nine 'Wuneetton' thrymsas recorded on the EMC at the time of writing, all of which have right-facing busts and show more competent die-cutting. The 'Wuneetton' type is copied from the 'Witmen' type and identified by its legend. As the legend is largely unreadable on the present coin, it would arguably be more accurate to describe it simply as a 'Witmen' type derivative."
So not something seen before, unique with a left facing bust... AND, extremely valuable if ever I decide to sell it.

The third gold was found very recently on an organised charity dig in Lincolnshire U.K. This field had previously been searched four times, producing several nice finds from the Bronze Age and Celtic periods. These included a Celtic gold Stater, uncovered in a small stony area of the field. As the rally started, I walked to the top of the field away from the known "hot" Stater area which was being swamped in a “feeding frenzy” by people with various detectors. But after a couple of hours these areas became deserted as people wandered off to new fields after finding nothing. So I decided to give the Stater Find-spot area a go with the EQUINOX, even though it had been searched well. I chose these settings; Field 2, Multi-Frequency, 2-tone and a Recovery Speed of 6 (out of 8), and started searching. I was soon digging pieces of small lead, including small shot and air rifle pellets. These missed targets gave me the confidence to continue. After about fifteen minutes I received a soft repeatable high tone response with a TID of 16. Digging down a full spade depth (10" plus), I turned the soil and target out of the hole. I then passed handfuls of soil over the coil until the target was in my hand. Dividing and re-scanning the soil, I was eventually left with a small lump of soil with the edge of a small gold coin sticking out of it.  Cleaning off the soil I was initially disappointed, as I thought it was ‘just’ a blob of gold. It was only later the following day when I showed it to Lisa Grace (Historica Auctions) that she said "it's a kidney head quarter Stater", a Gallo-Belgic imported coin (classification Cd).

So, as I said at the beginning, the EQUINOX has been lucky for me during testing. I'm sure these are only the first few of many EQUINOX golds. I expect that this impressive new metal detector is going to find a lot more in the future for lucky EQUINOX owners.