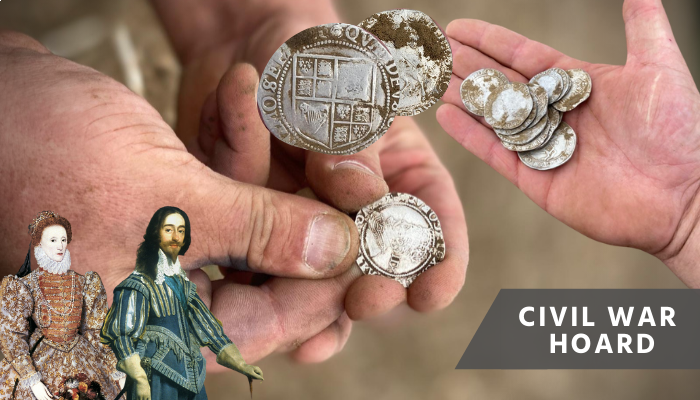 Its only now a few weeks later, as I sit looking out of the patio doors onto a very windy and wet day with the sea mist coming in gusty waves across the fields of our holiday home; that the reality of what happened to me and two of my best friends has finally sunk in.

A few people have since said to me that what we stumbled across is the find of a lifetime, I suspect they may be right; I sincerely hope they are not. Since that fateful day I have been in a slight daze, going back to work and the normal hum drum of daily life under coronavirus, my sons have both received their exam results for ‘A’ levels and GCSE’s and we were pleasantly surprised with their successes.

My wife and I have finished decorating one more room of our house, if you remember last time that’s what I was supposed to be doing instead of finding a hoard! I have since been out detecting on my own permissions with limited success and have attended a Joan Allen rally in Dover, where I completely struck out, I did see and identify for one lady several Iron Age Potin’s (Fig 1) that came up and had a great laugh meeting old friends and making new friends.I left off as Luke, Dan and I had just had a delicious roast dinner at the Lindsay Rose pub, Dan had already literally struck gold in finding a stunning rose gold quarter stater with the Quest Q30+ and I had found a sixpence with the Quest x10.

Feeling well fed and watered we decided that the best course of action would be to continue detecting where we had left off, it just so happens that this was less walking distance than the other fields we were detecting that day and has nothing to do with the fact that we were all a little full and sleepy after our pub lunch. As we had come off the field before lunch I had commented to Luke that I like to search around nice old oak trees, as I have found many Georgian finds and most of my nice cartwheel penny’s under them, also the midday sun was rather hot so the shade would be welcome. We headed in that direction and after a few minutes I had found a very spend worn silver shilling of George IV (Fig2), as I was walking to Luke to show him I had found a second silver with the little X10 he also wandered towards me to show me a cut half he had wrinkled up (Fig3), I said at the time it looked Saxon and as it turns out we later identified it as a Cnut cut half.

We continued to detect away for another ten minutes or so when Luke gave a shout, I was only a few feet away so trotted over to find him holding a very large and chunky Hammered coin (Fig4) that I immediately recognised as a half crown of Charles I.

Luke, instead of inspecting the lovely coin in his hand was telling me to dig another signal to his left, I did so and again another huge lump of a silver coin popped up, another half crown! At this point both Luke and I were shouting and jumping up and down at Dan as he approached us at speed from farther down the field. From that point on all hell broke loose; it was like a scene from bedlam three grown men with manic smiles on their faces randomly giggling walking round and round in circles and up and down in tight lines as we gridded the area.

You already know what we were looking for, the epicentre of the scattered hoard, the mother lode. We had put a Joan Allen baseball cap (Fig5) roughly in the middle of our search area and every few seconds one of us would shout “got one” or “oooh look at this one”. A couple of times I scuffed the ground with my foot to get a clearer signal, only to kick a coin or two in a cloud of dust. Soon the coin hat was full so we switched to the “bucket of awesome” which seemed to contain the hoard well. By this time I had swapped the Quest X10 for the Q30+ with Dan and both he and Luke were now swinging the equinox 800’s.

The first coins were found some 30 yards away from where Luke eventually shouted that he had a huge signal. Although Luke could see Dan and me finding coin after coin, he stoically kept digging and we began the exciting (as if it can be more exciting than it already was) task of digging down to the unknown target, almost immediately we were finding multiple coins and I mean handfuls of coins in each careful spade full taken from the hole (fig 6).

At this point we noticed some larger fragments of glazed pottery and all looked at each other and at the same time said “we need to stop”. We didn’t actually know what to do or what we should do. We weren’t thinking about what we were doing and I for one was not thinking straight at all, the adrenaline was literally pumping. It was about this time that Luke’s awesome wife Syrie arrived with a little red trolley full of digging equipment and refreshments. We all took a moment to stand back and look at what we had found and more importantly discuss what our next steps should be. The decision was taken that we should contact an ex finds liaison officer that had helped me with finds in the past, to ask what our next steps should be and who we should contact to have the final recovery of the yet to be located hoard. We were told that we should identify the location of the actual hoard for sure, but to leave it in situ and we would shortly receive a call from the Suffolk finds liaison officer Riccardo.

We finished our cups of tea and coffee that Syrie had kindly brought to us, and set about locating the hoard for sure. We knew where the main concentration of coins was coming from, and decided with the direction we had received from our ex FLO friend to carefully dig down in a two foot radius around this location so as not to disturb the hoard itself. As we reached the subsoil that was hard packed and a lighter colour; we then dug in towards the centre. After a lot of digging (With a Shorty shovel, yes they are actually useful when digging in a great big hole!) we came to a large agglomeration of coins and started to see pottery. This is where I will leave it for now; enjoy the clod shots and some of the other photos of that amazing day below.

Until next time happy hunting and good luck!