Q & A With Gordon Heritage - Addicted to the Buzz

Q & A With Gordon Heritage - Addicted to the Buzz 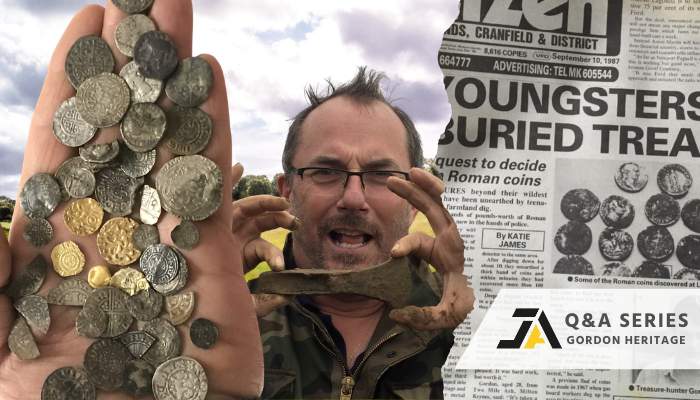 Meet Gordon Heritage, a highly respected detectorist who sat down with us and let us know a bit more about how he caught the bug...

How long have you been detecting and what/who inspired you to start?
I started detecting in 1976 after being given the pilot issue of The Treasure Hunter Magazine. This publication listed various important discoveries and the stories behind major hoards. As I read about these amazing finds I was excited to buy my first Metal Detector, and soon took delivery of a Compass `Induction balance’ model. I still remember opening the parcel and looking at its perfect metallic green paintwork and thinking it was better than that you see on brand new cars.

What's your favourite machine or piece of detecting tech?
The machine mentioned above started my love of the hobby, and for owning the latest shiny new machines. Over the years I’ve tried to own the best available, if only not to have an excuse if I wasn’t finding stuff “it must be me, I’m using the best metal detector available!” I’ve owned C-Scope, Arado, Tesoro/Lasers, Garrett, Redheats, Whites and XP machines in my pursuit of treasure. My recent machines have been mainly Minelab, who are at the cutting edge of new metal detector technology. I’m currently using an Equinox 800 which is light and fast in operation. This machine is the best I’ve ever used, finding me lots of great finds.

Do you think metal detecting has changed over the years?
Over the years the hobby has changed as technology has improved. In the early days the majority of detectorists searched parks, commons and beaches for stuff lost in the last 200 years. There was so much stuff to be found it was easy to dig a 100+ predecimal coins over a weekend. Detectors weren’t very good at discrimination, so you dug a lot of rubbish. As the years rolled on detectors got better; more sensitive, deeper and better at discriminating iron. People tended to detect more on ploughed land for stuff older than 200 years.

What's your best find so far?
I’ve been lucky to find some very nice things over the years. The first was the remains of a previously found hoard, 627 Roman Denarii which were scattered during the construction of a new gas pipeline. These were my first Roman coins and the were silver and in perfect condition, so exciting and still one of my favourite finds. The most recent was a large hoard of Bronze Age axes that are still proceeding slowly through the Treasure process.

Anything extra you'd like to add?
I’ve been in the hobby a long time now and there’s not much I haven’t found. I sometimes wish I could do it all again, finding things for the first time and getting that `buzz’ of excitement. Nowadays I’ve become a little blasé when finding certain finds others would find exciting, and I actually feel jealous for newcomers to our hobby getting  their `buzz’ when making similar discoveries for the first time. Thank god there’s always something bigger and better out there to be found, as I’m truly `addicted to the buzz!‘

Blog by Zoe Gascoyne, Thanks to Gordon Heritage for taking the time to share his knowledge past and present with Joan Allen.