Smelly Fields and Interesting Finds with the Fisher F44

Smelly Fields and Interesting Finds with the Fisher F44 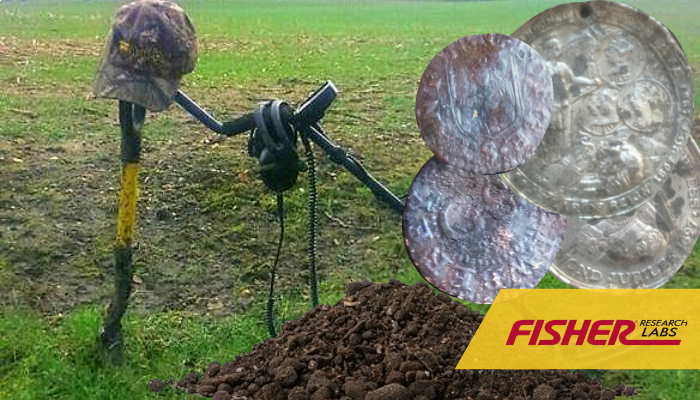 My good friends at Joan Allen metal detectors were kind enough to send me an F44 unit to finish off my field testing of the latest Fisher F series. As ever it seems with many of my reports, I have to say the last few months have been a rather damp affair. On several occasions I had been out in the field on what would seem to be a lovely day only to be caught in a random downpour that sent me trudging to cover only to be over almost as soon as it began. An ideal test for the most interesting feature of the new Fisher F22 and F44 being that they are weather proof, or perhaps more aptly for the UK shower and full on monsoon proof.

The weather proof feature intrigued me, so I decided (much to the dismay of my wife) to conduct a small experiment when not in the field with the F44 that I didn’t do with the F22. The unit lived in my shower for two weeks (apart from when my wife removed it). Not only was this a good test of its shower-proof ability, but also of humidity as I have had units fail on me in the past having got wet and apparently working fine when put in the boot of my car, only to find upon getting home that moisture had made its way into the unit and fogged up its display. Nothing that a screw driver, a bag of dry rice and an airing cupboard wouldn’t fix; however this could be potentially a show stopper if left to fester.

I have to say that this really was an acid test for the machine above and beyond what an owner would expect from a “lower end” priced unit and I was pleasantly surprised that it was fully functional afterwards. Now I just need a set of fully waterproof headphones and I will be bed ridden with a cold in no time. As with the F22 the first thing that appeals to me with the F44 is that it only requires 2 AA batteries, this other than making for a quick and easy battery change in the field as well as being half the price of my normal battery change on my main machine, makes for an even lighter well balanced unit.

The F44 weighs in at an impressive 2.3 lbs or to put it another way; two cans of baked beans and a small kiwi fruit, less than half the weight of some higher end machines and means it’s a machine you can swing literally all day. The main difference visually between this and its little brother the F22 is the larger 11 inch teardrop shape (Triangulated concentric elliptical) coil. As with the smaller version, this gives a good recovery speed due to the elliptical shape pushing the search area beneath the coil to a shaper “blade” of detection. Therefore this makes for a faster recovery as you hit iron (Fe) near a good non-ferrous signal (that you don’t want to miss) due to the coil recovering from registering the conductivity of the ferrous targets.

The larger coil however leads me to think this unit may be deeper seeking than the F22 as well as clearly coving a wider search area beneath the coil. Anyway as with any review we read; enough of the ramblings and onto the interesting part, the field testing. My first afternoon out with the F44 was with my father-in-law on his first ever detecting trip. I had chosen a field on higher ground away from the rivers in the area. I know this field to be “the Sceat field” as my good friend Philthy Phil pulled his first Sceat out of it within 20 minutes of getting out of the car and the Sceat dance is truly something to behold!

I had unboxed and assembled the machine and within 10 minutes was coil to the soil, at this point I noticed or rather smelled that the farmer had appeared in the corner of the field and was proceeding to spray liquid organic fertilizer (Poo) on it. We cracked on as clearly we now had a time limit! The first signal that wasn’t foil, was a small pistol ball or heavy shot, quickly followed as I progressed across the side of a small hill by several more, target practice maybe? I noticed the tractor approaching and stood well to the side the farmer waved and laughed as he drove past and got the customary nod and “stinky” hand waving signal. I continued on across and down the hill towards where I had had success before, leaving my father- in-law to continue along the summit of the hill.  Next up came a Victorian bun head penny with a lovely green patina from right in the field margin next to a single track road. As the next hour or two progressed I notched up a few more targets at respectable depth like modern coinage, a watch winder and a couple of buckles. The final target before I decided that I didn’t want to wonder through the fertilizer was a nice surprise, I don’t find many and it was a first for me on this field but it is a roman coin and looks to have traces of silver dip. Most people would call it a “grot”; however for me it puts another pin in the time line of this particular location.

My next foray was closer to home on one of my first permissions, a nice pasture field near the railway. I haven’t really given it a good go for a long time and have owned many different machines since then. However I was amazed by what I had missed! Maybe technology has moved on and I seem to remember that I was put off this field by all of the trash that I found, a lot of Iron, hot rocks, and tin cans and obligatory ring pulls (Tizer?). Of course I found a lot of ring pulls and cans again this time, you just have to dig them as you never know, however amongst these I found a lot of buttons, some of which tell a story of the local rail network as well as the military in the area. One rather nice thing I found was a Victorian commemorative medal celebrating the diamond jubilee in 1897.

Upon further inspection of the myriad of buttons I noticed one was actually a tiny token and I managed to find via the Portable Antiquities Scheme website, that it’s a traders token issued by George Stanton of Blewbury circa 1660 and is on the British Farthings website that describes this variant as a rare type with a shield with a facing Queen as the mercer’s arms; mercer being a trader in textiles or Mercery. It just goes to show that you should look through all those buttons and bits at the bottom of your finds bag before you consign them to the hedge, bin or scrap bucket. There were actually two lessons learned here as the scrappy looking bit of what looks like aluminium can in the bottom of figure 4 turned out to have a hallmark on it and is actually silver, I suspected from the oxidation of the metal that it could be something more and it was.

In summing up the F44 and the latest Fisher F series as a whole, I would have to say that I am impressed with the entry level price of these units, even the higher spec F44 comes in well below what some would call a mid priced machine. The features it boasts are impressive and I have many of them on my more expensive main detector. Ground grab ground balance as well as manual balance, adjustable audio tones, notch capability as well as pre set programmes for coins, relics and jewellery and a custom setting for you to make your own fine tuning (I used this myself and found it intuitive and effective). Combine these programming features with the physical features of light weight, weather proof and only needing two AA batteries and Fisher are onto a winner for the lower end starter machines up to the midpoint moving up detectorists. I will definitely be using the F44 as a very capable backup machine in some of my more contaminated permissions, as I found the tear drop shape coil to have a very good recovery for getting in amongst the trash. As you will see within Treasure Hunting Magazune, the Fisher F series machines are distributed via Joan Allen whose knowledgeable and very friendly staff would be more than happy to answer any questions you may have.