Nautical Finds and Holiday Fun with The F22

Nautical Finds and Holiday Fun with The F22 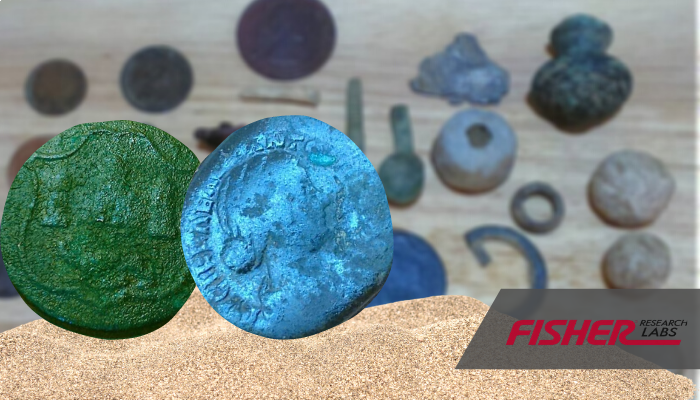 The next installment of father son bonding with the new Fisher series was a rather wet and windy affair. I had chosen a small field near a large manor house that we had only spent a few minutes on before, I have since completed some research on the grade II listed 17th century building and have found that it was commissioned on behalf of Isaac George Manley who was a naval officer with Captain James Cook on the first Voyage of the Endeavor and later commander of HMS Apollo that captured a French corvette named Legere. Needless to say it does lead me to think of the very early naval button that Oliver had found with the Digitek on our last visit to this location. As stated the weather was not so good and at its worst was lashing it down, at which point Oliver retired to the car for a hot drink and his packed lunch, while I continued to test the F22. As luck would have it, the machine managed to produce a rather nice king John cut half hammered coin, a lot of people grumble about halves, however I like them as it shows that a machine can pick up a very small target. The depth was also pretty impressive at around 5 to 6 inches, I could attribute this to the wet conditions allowing for more depth, however is none the less a good indication of performance.

I found that although there is the option for specific coin and jewellery and artefact pre set program’s that if I utilised the custom setting and ramped the machine up full that I was hitting a lot more targets. The nature of British coins and specifically the elusive hammered coins being so deep as well as small means that it felt that the machine was not matched to the conditions of the UK “coin shooting”, needless to say it did pull a nice George IV half penny in coin mode at a respectable 7 inches in green waste contaminated ground.

I found that although I do like the new button set up, making changes on the go while wearing cut proof gloves covered in mud was not easy as the buttons are rather close together and I have large thumbs and were obscured by my thumb and glove, so I had to stop and remove the glove to adjust, not a big issue. I was picking up some interference from my son while he was using it, this did not materialise in the normal way of false signals and beeping out constantly, but instead made a kind of burbling or chirping noise on signals. Therefore I could continue to detect at about 10 feet away. My final signal of the day before being beaten by the British weather made me smile as it was yet another navy button, this time silver not gold gilt. I have to admit I am not a button aficionado; however these finds have made me want to gain a better understanding of the time periods surrounding military buttons.

Overall I was impressed with the quality and performance of the F22, the build is good and I was glad to see the coil to control box connector was the conventional more sturdy knurled lock nut affair rather than a push in like the Digitek. I was also impressed with its ability to withstand the British weather (with rain at times coming in sideways) and upon taking the batteries out that evening (I always remove batteries from electronics when not in use as have learnt the hard way that they can leak and destroy your kit) and cleaning the machine down, I found no ingress of moisture within the battery compartment nor behind the display.

Adventures with The F22 continued:

I had recently returned from a week’s vacation in Norfolk UK and I have to say from the start that the weather was terrible, but this did give me the opportunity to again test the water proof feature of the Fisher F22. This time I wanted to really get to know a specific mode as for me having used machines with no pre set “modes” (I am a hard core T2 user) I custom set my machine each time I am in the field depending on the conditions and what I know to be present from experience (Coins, artefacts’ and so on). I decided that the best mode to start with would be the artefact mode as this gives me a fully open set up without discrimination or notching and is very similar to my “go to” tone setting for the T2 of 2+ so I can hear when I am moving in on a hot spot with the ferrous grunts and broken tones as well as hearing those sweet-sweet-beeps of good targets. I am also using my Chef Phones made by the head phone guru Geoff West-Osborn, these were specifically made for use with the T2 in mind, pushing the deeper bass ferrous grunts to the background and pulling forward the nice treble of the positive beeps. I have been to this permission in Norfolk for my annual family holiday on a yearly basis for a while now and have several different areas or “hot spots” that I hone in on based on the weather, the machine I am using, and the mood of my children and above all the amenability of my lovely wife. This year as ever most of where I wanted to go was under crop or waist high having been laid fallow for the season. This I have to say made my heart sink as we drove in on the first day.

As per normal we had a visit from the farmer that we rent the barn conversion from on the first night, I mentioned the lack of fields to detect on and he told me that there was a field that he had just had the first earlies (the early crop of potatoes) taken up on the top field. I knew that I had only found one decent coin with my T2 SE from this area (A lovely chunky sestertius of Lucilla (fig 2) and that the field had also been used by the Royal Air Force as a strip as well as a chain home radar station during the war, so was hoping to find some evidence of this. I only had an hour or so to get cracking while my dinner was in the oven and the evening was closing in fast, as I made my way into the unknown I looked back to my car and noticed a Barn owl sat on my roof bars where I had parked under a large Oak, taking this as a good sign I cracked on. The triangulated or teardrop shaped elliptical coil has proven its ability to both cancel out heavy ferrous contamination as indicated in my last report, where I searched an old Victorian well that had the completely disintegrated remains of the pump pipe in the detritus at its bottom, however this field sounded like it had a bad stomach with all grunts the F22 was making.

Within 10 minutes I had hit my first keeper with a clear positive tone the machine had locked onto a target, I love First Texas machines ability to kind of bite onto a target like a terrier. At a very respectable depth of 5” I pulled a rather interesting token out (Fig 3). I later found out by asking my very good friend Philthy Phil and discussing that the contraption on the back looked like an old loom that it was an 18th century ‘Hand-Loom’ token minted in 1792  surrounding the coat of arms of the city of Norwich. These arms comprise an escutcheon, which encloses a rampant lion before a three-towered castle, with a loom and spinning wheel on the obverse side. If you look up the token you will find it a very interesting read explaining the reasons for its usage and some history of the minter / maker John Harvey of Norwich. I continued on with the usual suspects turning up spasmodically, Victorian coinage, Elizabeth II coinage,  musket balls a spindle whorl, broken annular buckle and a nice little Jacobean “cooking pot” shoe  buckle dating from the 1690’s (Fig 4 bottom left).