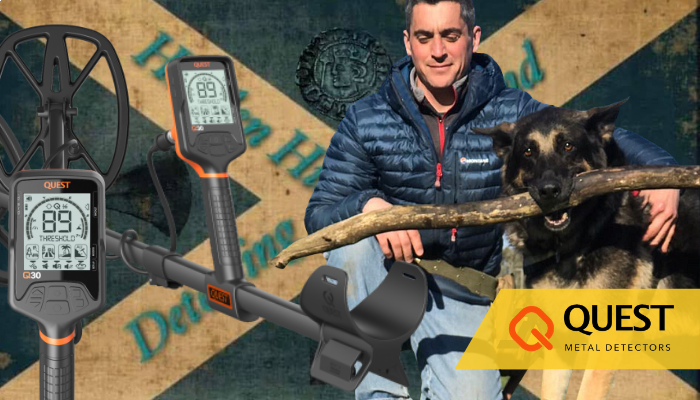 So, who are Quest Metal Detectors??
They are a new and exciting American/Chinese manufacturer registered in California USA, that are offering us some remarkably interesting machines that everyone should know about. Their range has something to suit all, starting at the entry to mid-level with the Quest Q30 and topping out with the Quest Q60 Pro, all these machines are definitely worth our attention.

I have been lucky enough to test out the Quest Q30 and what I found is certainly worth reading about. The Q30 is pitched at the entry level of the market, this end of the market has in recent years seen the introduction of some extremely exciting machines that have a vast amount to offer. All of these machines are affordable, Minelab, XP and Nokta are just a few of the companies offering high performance for low cost and the Q30 is no exception. In order to allow the manufacturers to produce these machines at low cost they have had to find ways to cut costs.  Minelab’s Vanquish for example has a very basic control box and design, with options to upgrade functionality or to choose wireless headphones. In order to keep the production cost down Minelab chose not to waterproof their Vanquish range and saw fit to return to the archaic AA batteries, however their trump card was their Multi IQ!
The Nokta Simplex is another example of the entry level machines, this is a fixed frequency detector, but it does come with the option for wireless headphones and is fully submersible to 3 meters.

All of these machines show their cost cutting compromises in one way or another, be it build quality or performance, or lack of features and functions. This is to be expected when most of them are being offered to the market  for around £300! ... Should we expect the unheard-of Quest Q30 to be any better? Read on and find out.

It is said that first impressions can’t be changed, and as I opened the box of this shiny, but perhaps slightly orange machine I wasn’t disappointed. The first thing to impress was the build quality, the square adjustable shaft is solid with sturdy and easy to use camlocks. Another great feature is the fully adjustable controller which can be slid fore and aft offering endless adjustability to suit the user.
The control box is business-like, offering you all the information you need without being over complicated. The buttons fall easily to hand and while feeling rugged it still retains a sleek look. A quick push of the power button has it springing into life and after a quick ground balance you are ready to detect, it really is a turn on and go machine.
The Q30 has 4 detecting modes, Park, Field, Beach 1 &2 and Gold, these different modes offer you varying levels of adjustability with the option to adjust tones, sensitivity, iron volume and discrimination notching.
The soft touch buttons on the left hand side of the controller allow you to easily adjust the volume as you go, or you can select the vibration mode, great if you are using it under water without waterproof headphones. The right-hand side soft touch buttons allow you to select the back light which has two levels of brightness, it also allows you to select the wireless mode on the Q30+ model.
I opted for the Field mode for my first test run, it seems to run slightly hotter than the Park mode allowing you to hear all the iron chirps and grunts.
The field I initially chose is one we have all hit many times before, it is a remarkably busy field filled with small scraps of Victorian copper and almost everything else that you can think of. I chose that field for two reasons, firstly because it’s so busy and secondly because it has been detected many times before, so if the Q30 could find anything there that may have been missed by all the other machines, then I would be impressed.
The tones are very informative, they quickly allow you to build up a picture of what your target is by the way they report to you, not dissimilar to the way the XP Deus gives you feedback, although the tones sound different to the Deus.

The Q30 really is a coin machine, it hits hard on coins and there is no mistaking the tones when you find one. That said I was slightly concerned that the fixed 14 Khz frequency may not pick up on the small items such as hammered coins, especially if they are cut or on their edge. I need not have worried though, because an hour into my first outing with the Q30 I got a solid bright and chirpy tone that turned out to be an Eddie I hammered coin at around 5 inches deep. Over the subsequent days the Q30 continued to deliver, it pulled out a haul of Victorian and Georgian coins, copper and silver along with many other artefacts that had been previously missed, but what impressed me most was its recovery speed.

The recovery speed and iron separation are really something to behold, and I can only assume that this was the reason for its success in that particular field. I have now built up quite a few hours on this machine and the more I use it the more I am starting to notice design features that other high-end machines should take note of.

Some of the subtle design features that allows the Q30 to stand out from the rest are simple but important. The large and sturdy coil mounting lugs are one of the first things I noticed (if you own a Equinox you will understand my reference to those) The solid square 3 piece shaft with its sturdy cam locks exude quality. The fully adjustable controller that quickly slides into place to allow you to set it perfectly to suit the user is a simple but very effective touch.
Other simple but effective touches are the rubber mud guard surrounding the controller, the arm cup that is sturdy yet flexible, and has the added touch of mounts to allow the user to clip their pin pointer to the underside of the arm cup should they wish to do so. Another key feature that lets you know the designer has really thought about this machine is the ability to make 5 separate changes to the frequency in the case of interference from other machines or if EMI is present.

If I were pressed to find any flaws in the Q30, then I would have to admit that I am not overly enamoured with the wired headphones. Now it is no secret that I am not keen on wired headphones full stop, but these headphones seem to be the area in which Quest have cut costs. They work as well as can be expected but they feel cheap and sit awkwardly perched on top of your ears instead of over them. The Q30 doesn’t allow you to buy wireless headphones at a later date either, as you can on the Equinox 600 for example. To have the wireless option you will need to buy the Q30 + or you could opt to buy Quest’s Wire free transmitter and wireless headphones. For most, wired headphones may not be a problem and you might say that I am picking at minor faults, and you will probably be correct, but it is the one thing that for me detracts from the enjoyment of using this machine. However, I already have my eye on the Quest Wirefree Pro headphones which I think deserve their own review some time soon!

So how would I summarise the Quest Q30?
It’s important to note, that I am not comparing the Q30 to the Minelab Equinox or XP Deus, because I feel that would be unfair. My review is based on exactly what it is, an entry level affordable detector that is competing in a marketplace with some strong contenders.

So where does it sit in the entry level marketplace? Firmly at the top!
The Q30 is by far one of the best built machines I have seen or used, it has features that I would only expect to see on the high end machines and its performance is something that the big boys should be worried about! Its balance and weight mean that you can happily swing this all day without any concerns. Yes it has some down sides, it is fixed frequency in a world where all we talk about Multi IQ or Simultaneous multi frequency, the headphones feel as if they were bought from a pound store and at this point in time most of us haven’t really heard of them. My personal forecast for Quest and importantly the Q30 is that it is here to stay, it performs well above its class and I would happily take it anywhere with me without wondering “should I have brought my Equinox?” As people become aware of Quest and the Q30 they will soon learn to love and trust this low cost machine that punches well above it’s weight.

I will certainly be keeping this Q30 in the stable.