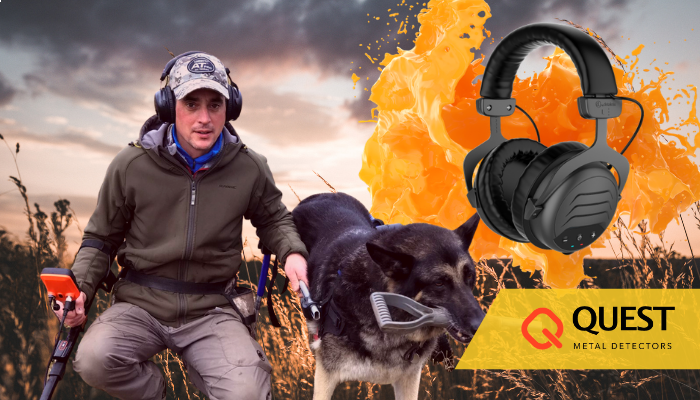 There are several types of detectorists. There are the VDI number people, the tone people and those who tend to combine both.
Regardless of which camp you sit in, we all need to be alerted to the presence of a target, that alert comes either from the detectors’ built-in speaker or from the headphones that you have, firmly clamped to your head.
I reside in the tones camp, I pick my “dig or don’t” dig targets from the sounds that are reported to me, all be it that I may infrequently glance at the VDI for conformation. So, for me, setting out for a days digging without my headphones would be like leaving home without my mobile phone, or it  would be like trying to get through daily life without the internet or Google!

Over the years I have grown accustomed to the freedom that wireless headphones provide. No more headphones being yanked off your head as the cable snags when you are digging. No more worry of embarrassingly slicing through the cable as you over enthusiastically attempt to remove that lost fragment of history from the ground. So when Quest’s new Wirefree Pro headphones arrived for me to try out, I was rather excited to say the least.

So, what are the Quest Wirefree Pro’s all about?...
They are, as they say on the tin, wireless headphones accompanied by a transmitter that plugs directly into the audio output of any detector. Meaning that you can turn any of your machines into a wire free detector!

Here is what I thought…
Even before I removed the headphones from the box, Quest’s colourful and eye-catching packaging only served to enhance the anticipation. The headphones feel sturdy and weighty, not weighty in an overly heavy way, but in a way that says “quality”.  Importantly they are large enough to sit comfortably over the ears. They grip firmly enough so as not to slip and slide around, but not so tight as to leave you thinking that they are some form of medieval torture device.  The ample adjustment means that regardless of your head size or shape, they will sit correctly and comfortably, even when wearing my trusty baseball cap. They feel as if they were made to measure.
There is also no need to worry if the good old British weather catches you out either, the Quest Pro headphones are rain proof! Both the micro USB charging port and the 3.5mm audio jack, have plastic caps that fit snugly in place to stop water ingress.
On the left-hand side there are three soft touch buttons. The centre button takes care of powering on & off and pairing, the left and right buttons allow you to adjust volume, and below the buttons there is an LED, this LED informs you of the battery state, charging status and if the headphones are turned on or off. Simple and functional!

The transmitter is small and light enough to be discreetly attached to any metal detector, it comes with option of fixing it in place with either the rubber bands or the adhesive Velcro pads that are also included.
On the front there are an easily visible row of LED’s, these indicate battery state with the simple push of a button. This same button also serves to power on & off the transmitter. The transmitter connects directly to the audio output of your detector via a short audio cable, this cable has the options for 3.5mm or 6.35mm (1/8” & 1/4” in old money) included in the box too.
Pairing the two devices together is quick and simple, turning on the transmitter followed by a two second press of the headphones power button, has the two devices linking together effortlessly. Lots of other headphone types out there make the process of pairing not dissimilar to a test for MENSA. No such problem with the Quest Pro’s I am happy to report!

As I write this article, I can hear your distant shouts of “yes but is there any lag” well the answer is yes!
But do not be alarmed, don’t start surfing the web for an alternative brand just yet, because the delay is a mere 0.06 seconds. That fraction of time isn’t even perceptible to the human ear, and in fact, that microscopic lag is considerably less than some other well-known brands.
All these facts and figures are great on paper, but how do they stack up in the real world, a world of wind, rain, jacket hoods and muddy fields?

I have been using the Quest Wirefree Pro headphones for several weeks now, and true to the area that I live in, they have been exposed to a whole myriad of weather types.
The padding on the headphones offers a great balance of noise reduction. They allow you to concentrate on the all important tones, but not so much that it cancels out the sounds from a pin pointer, or the dulcet tones of your detecting partner (all though the latter could be a bonus sometimes).
Although they are large enough to sit comfortably over your ears, they are still slimline enough to fit under a jacket hood without effort. The tones are clear and full, there is no sound distortion, giving you confidence that you wont miss even the faintest chirp. And importantly both the headphones and the transmitter have a battery life just shy of 24 hours, that is long enough to outlast even the hardiest of detectorist, and his machine of choice.

Like any product there are always some imperfections. I found that a slight knock easily dislodges the rubber band that holds the transmitter in place, finding it flying off to never be seen again. Fortunately, I chose to use both the Velcro pads and the rubber band, so this wasn’t a showstopper. At times in high winds the air rushing past the headphones created a slight whistling sound that could become distracting, but to alleviate this I simply put up my hood.
Initially I thought the price of £150 was leaning toward the steep side, but what we need to remember is that the Quest Pro’s can be used on any of your machines, or if you upgrade your detector you can simply take them with you. So I actually think that they are quite reasonably priced.
More amusing than disappointing is the user’s manual. Yes, its printed in a handy splash proof booklet that you can slip in your pocket but…
The translation is, shall we say, amusing. To add that final touch to a classy, finished product it could certainly benefit from the critical eye of a copy editor.

To summarise my thoughts of field testing the Quest Wirefree Pro headphones so far:
They have the look and feel of a high-end product, that is matched by their performance.
Not once have they failed to connect or lost connection, they haven’t been affected by any form of EMI and most importantly they are comfortable. They have without doubt enhanced my enjoyment of using the new Quest Q30 metal detector and I am confident they will do the same for any other machine.
If you are considering treating yourself to a new pair of headphones this Christmas, I would certainly recommend that you look at these.

I for one am happy that my Christmas present came early.