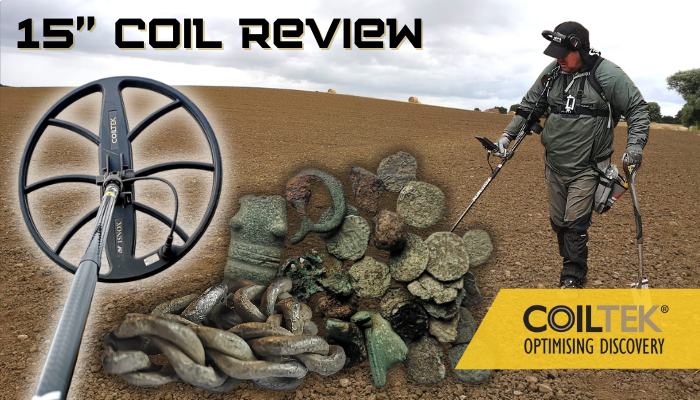 I eagerly awaited the arrival of my Coiltek 15" coil for my Equinox 800, the arrival seemed to last forever as I had mine sent from Australia. But as with all things, time came and went.  When it did arrive I did my usual style of unwrapping which wasn't a style at all, more like this parcel will disintegrate in ten seconds type of thing.

Once opened though it was time for the fitting, which was done with carefulness and precision, because as we are all aware, one's detector is one's baby after all.
After the fitting of the coil is done comes the next stage, lean it against the fireplace and occasionally look at and admire the new marriage, then lean it against the windowsill and look and admire it again.

This is my routine until I press the on button and start waving various coins and artefacts picked up from the already mentioned windowsill come display shelf across the coil.
Turn the machine off and admire it again and repeat the same process until the realisation that I won't find out it's true power and winkling abilities until I'm out on an actual field detecting in natural circumstances.

The first test of the coil was on Advents Sunday digs run by Keith Lloyd, it was the perfect site for its first outing as it’s one of those look forward to doing those fields again sites especially knowing the patches that produce when gridding. For all you ‘been there before’ people out there this was approx our 12th time hitting this farm and it always produces, mainly late medieval but Saxon too.
The field was nice and flat as it had been rolled.

So first things first, the coil isn't very well balanced making the detector feel top heavy, so knowing I'm going to be swinging all day and most likely last off the field too I attached it to my home made bungee/rucksack get up.
I now had a feather light metal detector 'perfect'.
I chose a small area of the massive field to grid where the odd Sceata and Styca came up and artifacts and partifacts.

As soon as I started detecting I knew I would need to get used to the different traits of this coil, it sort of had a different accent to the Minelab 15" stock coil or previous 15" Coiltek (WOT coil).
I instantly noticed it was more sensitive, I wondered if that meant more coiled copper wire which would also be more grams to the ounzage ?
The next thing to come to my attention was after finding quite a few small bits of lead I noticed that the signals of the faint ones had a sort of fuzziness to the edges compared to the clear double whammy signals of the clean clear out of iron's way lead bits.
It wasn't just the lead as the faint low tone note of one half of a copper alloy Saxon tweazer and similar partifacts acted accordingly.
A faint medium tone 14 _15 with a fuzz to the left edge of it got me digging approx 11" revealing a compact clump of sandy soil that showed silver links appearing, I thought to myself Victorian link chain crumpled up although I also had a could it be Saxon type niggling thoughts too but decided to wash the soil out later at home.

More lead of various sizes and buttons are all I recovered from that spot so I decided to move on to the upper part of the field where people were grouping, a tell tale sign that nice finds are surfacing.
I found out that a Saxon Sceata, a Saxon Styca and half of a Dragonesque brooch had been found.
I made my way up there and started swinging, finding more lead and copper dross plus Saxon partifact thingy whatsits. After several hours a low tone approx number 6 rewarded my eye's with the sight of a Saxon Styca and was I chuffed with that one.

When I got home I cleaned the clod with the links in and it was several rows of thick chain links that looked like they had been chopped.
I instantly thought hack silver and after a quick Internet search I got the answer I wanted, Saxon silver chain, probably a thick wrist bracelet /torc.

My next outing was again on one of Keith Lloyd's digs and yet another one of his sites that I wait and look forward to every year to return to. It's an absolutely massive field that has a Roman hotspot and a Saxon hotspot and the rest of the field produces finds from all era's.
The field is very mineralized and contains lots of iron plus enough coke to run a fleet of steam trains for years.
Hotspots by nature are usually the noisiest ground to search due to human activity. So this field was good timing as is a great test for any coil especially the larger diameter ones as they have always got bad press about using on bad ground which in my mind stems from the larger coils back in the day paired with control boxes with lower tech and has since just been accepted as the norm like several other myths I could mention.

When multi frequency machines from Minelab appeared it changed everything in the detecting world for the better and each upgrade of each machine ever so slightly improves on the already fabulous tech.
Anyway I usually start detecting on the Roman hotspot below a trig point on the field for approx five hours and then head over to the far edge of the field to detect for Saxon finds until dusk.
The only downside is that it was stubble, but we can't complain and the Coiltek handled it quite well due to it's bulk plus I could detect in the narrow squashed stubble rows made by the wheels of the combined harvester and other farm vehicles as well.
I drove up the side of the field to the Roman patch below the trig. Most of the coins and artifacts are very shallow in the top 3" but most people give up within the first hour on this small area as its really hard to get a signal here.
If you know your multi frequency Minelabs well they rule the roost in the bad ground.
Especially if you can use the full raw open power of the machine. But you also need to combine it with a very slow and correct swing technique.

I got prepared and started detecting in a flattened stubble tyre track. Within a couple of minutes a fractional scratch of a low tone in my headphones and a shallow dig of soil not more than 2" with a display number of 2 produced a small Roman bronze grot.
I carried on detecting from the exact spot of that signal (this you should always do) listening to the Coiltek decipher the ground sounds. It was better than the first time using it as I was deeper into the coils short learning curve.
The next signal was a lovely crisp medium tone showing 14 and was a piece of lead, it's funny though how we always think a signal like that will be something special.
Another ten feet of overlapping the coil with lots of ground sound then another really short hardly noticeable low to medium note was heard showing or should I say sporadically showing 8 on the display was a slightly bigger Roman bronze coin.
Occasionally but very rarely I would get a tiny tiny partial very faint hollow sounding low tone and when I eventually tracked it down with my pinpointer it turned out to be a small bb shot size iron blob, now when I get these signals I know what they will be but erm what if ! So dig em I probably will lol.
The extra sensitivity of the coil will also help in the parts of the hedgehogs back stubble that was really short approx 2-3", just slide lightly across the top and any positive nonferrous signals are more audible than usual.

It was on this hedgehogs back stubble that I got a good solid medium tone giving a 17, including the stubble it was probably approx 8" deep and turned out to be a zoomorphic looking partifact with an almost pastel mint green patina.
It looks to be a brooch or strapend ? with prominent eyes and missing the nose, it looks almost crocodile like. Whatever it was I love it.
A few more grots later and a very scratchy low note from the astounding depth of half an inch and I had a small catch plate of a 1st-2nd century Roman trumpet brooch, again only a partifact but i'll take it.

The rest of my time on the field was taken up finding Roman grots half a Tudor spectacle buckle and the body part of a Tudor clothes fastener, oh and a few more grots.
I stayed till gone dark, earlier on in the first part of the day I set up and helped seven detectorists intermittently with there machines so had to make up time.

It was another Advents Sunday digs I was out on next, again good site for Saxon and stubble again but nice soft barley stubble.
I don't mind much when it's barley, I had absolutely loads of signals but just could not hit anything choice.
Right at the end of the day I got an absolute almost inaudible I'm going to play silly sods and make you work for it signal, then when I had it out for the 5th time it took ages to pin it down with my pinpointer.
It was not complete, it was very small, it was also thin, it had a small rusty blob on it and was once a complete circle but was now only just over half a circle.

What it was I have no idea although I gave it lot's of guesses.
So three sessions, two treasure finds isn't half bad, I spent a good half hour looking for the missing bit but I was just clutching at straw's.

Summing up the extra sensitivity of the Coiltek 15" in my opinion helps with depth, it helps with winkling tricky finds from highly mineralized soil and in between iron.
It of course helps with ground coverage and its a stubble, grass and weed crusher.
It takes a bit more mastering than usual coils, as said it has a small learning curve so if your the type of detectorist that buys something and doesn't like it after a day then don't bother.
It's not well balanced so if your not part of the cast of Game of Thrones you will need to use a bungee.
Pinpointing with the coil can take some getting used to and it fools me still now sometimes, it's live all the way around the full diameter but you will get used to it.
I absolutely love this coil, when attached to an Equinox 800-600 its a marriage made in heaven and if you see me in a field it will most likely be on the end of my Equinox shaft.

Thanks to Luke Mahoney of Joan Allen and Coiltek for giving me the chance of using this fab item.